Home ImportedDragonfly in the City of Angels

in the City of Angels

I made it to LA. Seems hard to believe, but after only 3 hours in California, I stopped at the Hollywood Hostel (where Katie and I stayed last time we were here) and got myself a place to sleep. I’m in Starbucks right now after having signed up for my month of online service at T-Mobile hotspots, ready to post some pictures from my digital camera for you. So that this main page doesn’t take forever to load, I’ll post the pics in the Read More link. There’s even a picture of me in there after 17.5 hours of driving. I look every minute of that 17.5 hours, too. Wow. But you can see how long my hair is now if you haven’t seen me in a couple of weeks. It’s sort of ungodly. I need a trim, I think, but I need a job and a place to live more.

When I’m done here, I’ll get a Post Office box so y’all can send me mail, find a bank so I can get money (wouldn’t that be a dream?) and maybe take a nap. I have to get an LA TIMES for apartment listings and to get a sense of how much things are going to cost. Click below to see the shots I took along the way.

So there are a few caveats. First, all images have been resized to 640 x 480. Other than that, I haven’t touched them. I didn’t even cut out all the excess sky that I have in most shots because I don’t really want to spend all day doing photos when I have so much to do. Second, you can learn about the CMOS chip refresh rate a little by looking at the pictures taken sideways. The guardrail posts in the first photo aren’t really tilted that way, it must just be that instead of capturing the whole image at once, it captures the image ALMOST at once, and 85+ miles per hour is faster than the refresh happens when things are whizzing by so quickly. Pretty neat, huh? The forward shots and the far away shots aren’t really affected because they move less relative to the lens, but the stuff that’s very close looks a bit distorted. I think it’s cool. Now, on with the pictures. 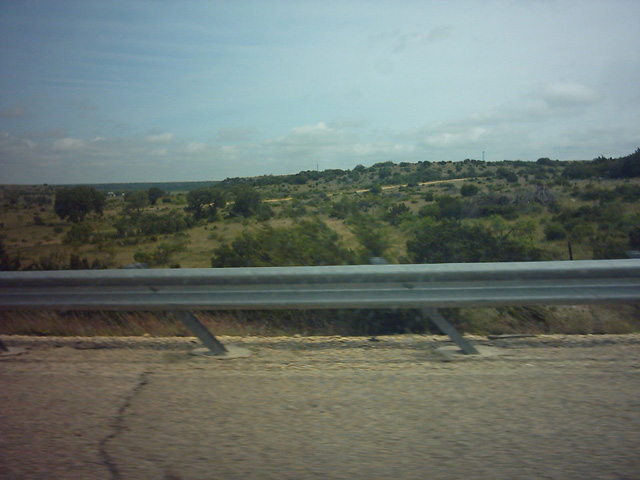 Hills in Texas a bit west of San Antonio 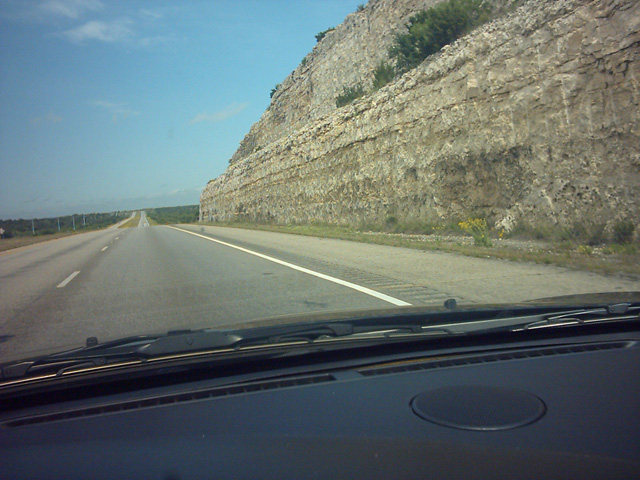 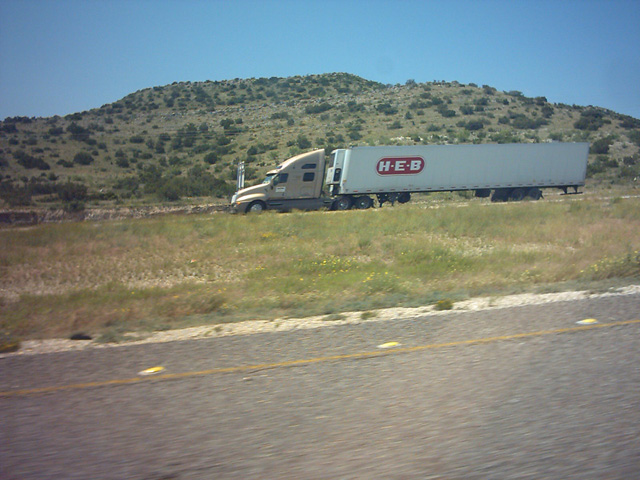 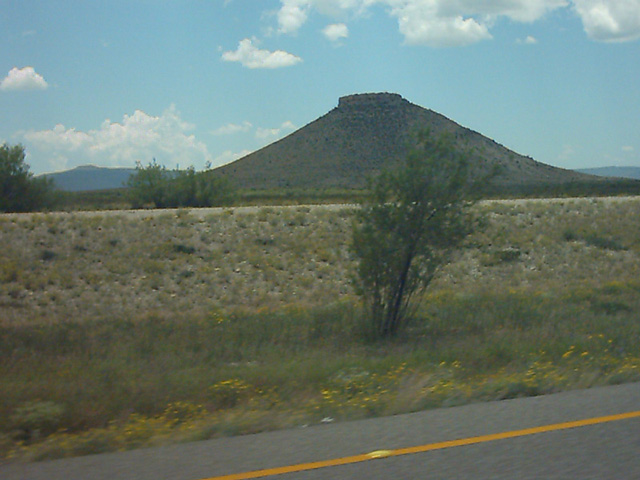 A former volcano? Looks a bit like a boob to me. 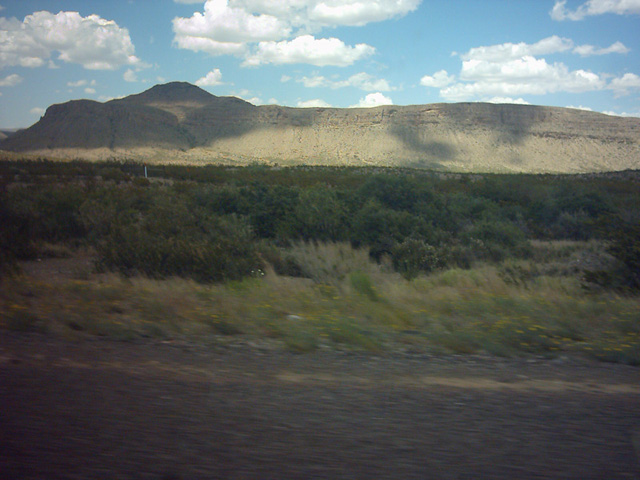 Neat shadow patterns on the hills in the distance. 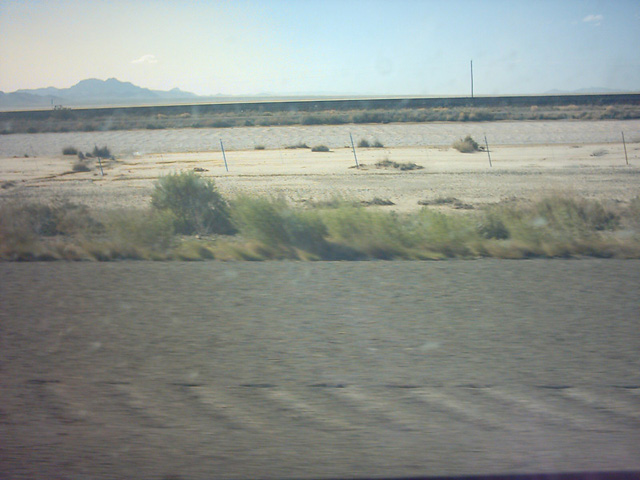 Real desert. Who else brings you pictures of sand? 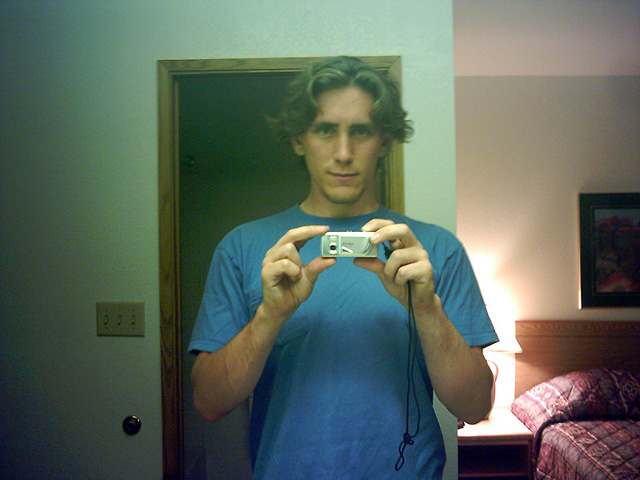 There I am. Dirty and tired, but still self-referential. 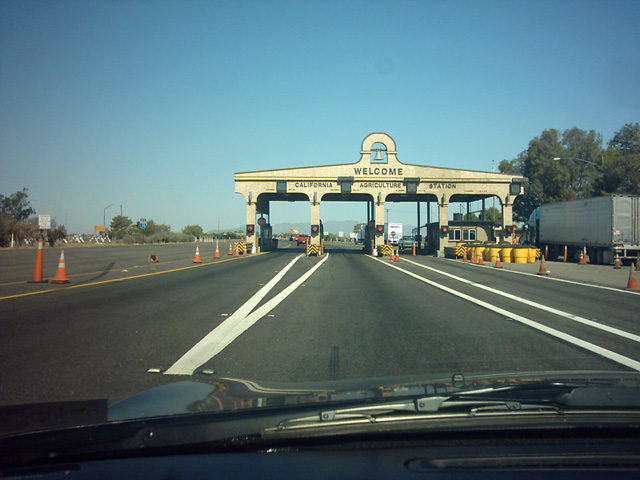 California Customs. Nicer here than on I-40. 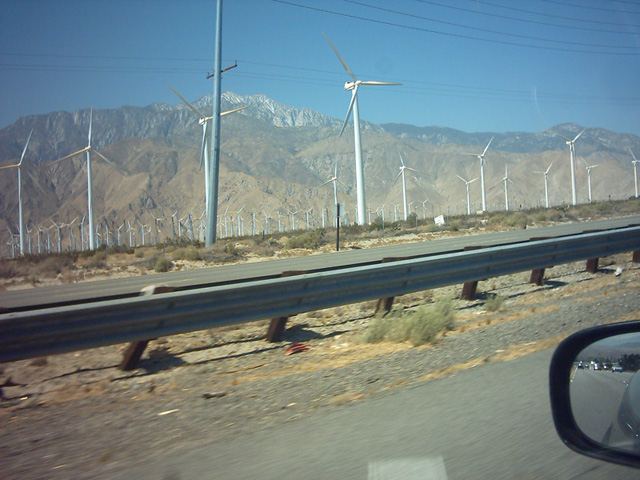 A Windmill farm near Palm Springs. 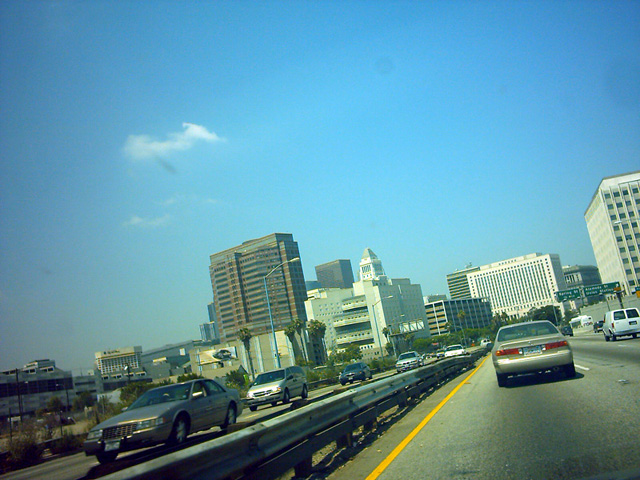 Finally. LA. A bad picure, but not a bad place to arrive in.

The votes are in