Tooting my own horn

Thats what I do, afterall. However, this time I have some help from an old friend, one whose sense of the impermanence of things is often better than mine, and who actually does something about it. This is Becca. I love her picture – I have no idea how it came out looking so damn cool from inside a movie theatre, but thats for her to know and me to find out. 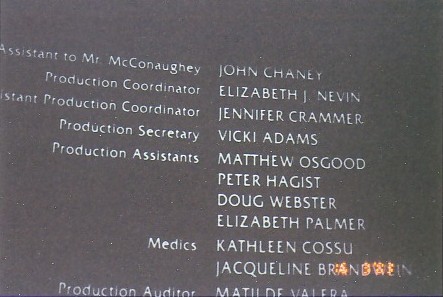 And there it is. Pretty damn cool, right? Man. Anyway, thats the only photographic evidence in existence (as far as Im aware) that Im not lying about this whole movie thing and that Im not just a full-time insurance salesman.

I would have put this up last night, but I was winging for Russ who was trying to get together with this girl, who was very cool (“the complete package…”), but was also way too unpredictable and preoccupied for our own good.

It was a good time, though, and the fact that this was time number two in as many nights leaves me tired as hell because Im still (and rightly) unable to get up after 8:30 or 9 in the AM.

Anyway, I hope you like the picture (I do) and I hope that you weekend so far has been outstanding. Oscars tonight, until all hours, so be prepared. Monday is going to come as a great shock to us all, I fear.

full frontal nerdity
The Codex of Me, the Rosetta Stone of Myself, the Dictionary of I. Enter at risk to your sanity - no apologies here.
@1995 - 2021 - All Relevant Content